Thoughts on Free Market and Capitalism...

I remember the feeling back in high school when I first picked up an economics book and starting sifting through the pages, it was a truly enlightening feeling. Having gone through some dreadful number crunching with my accounting practice, it was a very soothing experience where it seemed like that for a moment I was in a world where numbers didn’t drive everything else around them but everything around those numbers drove them. This might seem like a very odd description of that experience, but in essence that is exactly how I perceived economics in that moment, being the sole explanation behind all the human behavior and actions in the so-called “market” which in turn were culminated in numbers which were just a way of expressing the cumulative sum of the gross actions of these players in the market.

Now I am not sure how many of the readers are actually familiar with the term market in the more economic sense, but in principle it is just a simple idea which says that a market is formed wherever there is an interaction between two parties (can be individuals or group of individuals) and there is either value created or exchanged as a result of that interaction. Now this interaction is a very hotly debated and researched topic in the field of economics over the century and it seems like it has also formed the basis of very prominent ideas which in some cases have even become part of the regular cultural vocabulary of our societies around the world. 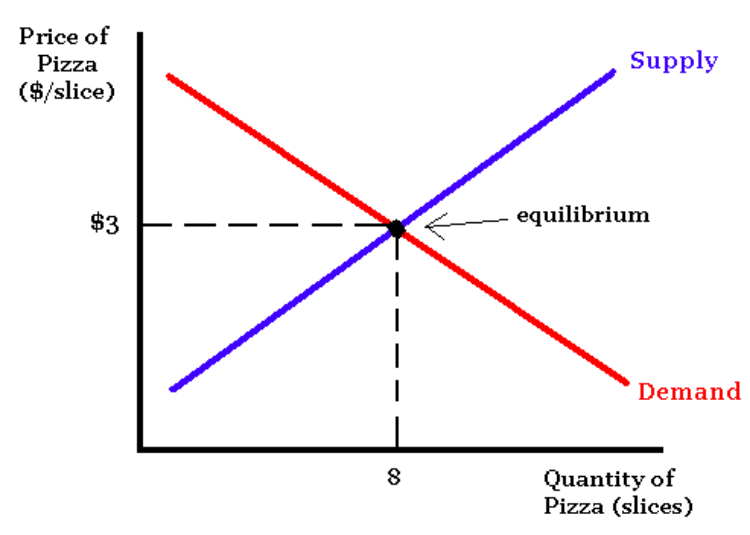 One of those terms is related to the very interesting and one of the foremost and certainly very important ideas of free market. In short it is a type of market system where the forces of demand and supply determine the amount and value of the trade that takes place. Such a system assumes very low amount of barrier to entry into the market, very minimal government or regulatory intervention (there are varying views on this) and the assumption of perfect knowledge on the part of the both buyers and sellers (which in real life might never be the case). In theory the buyers interact in such a market by creating a need which is symbolized by the demand for the goods or services in question and the sellers interact by fulfilling that need using a supply side push for the good and services. The above very typical depiction of such an interaction in the classic curves shows that an equilibrium has to be established in order for any market activity to take place and hence the movement of these basic curves is what drives the price of goods and services in such a market. Now in theory this sounds like a very perfect and nice idea however in practice just like anything else it seems like it comes with a certain roadblocks. The interaction of such economic ideologies with our ever-evolving (this is debatable) political systems is what has made this market interaction very interesting and some cases the cause of failure for economies around the world over time as humans progressed from the simple barter exchange markets.

My thoughts on this very idea which in theory sounds very nice but in practice can be dangerous are based on my naive (as some might say) understanding of these economic concepts. It seems like the idea of an ideal free market first of all has appealed to the masses like its political counterpart in “democracy”. Free markets are like the economic democracies of the market interactions and every person has kind of a “vote” in terms of their ability to buy (demand) or sell (supply) a certain good or service. And ideally for the very notion of free markets to work out these players in the market would all be making independent rational choices with perfect knowledge of the market. Now in lot of cases either one of these assumptions or cornerstones of the theory are violated. Most prominently the role of the government and regulatory bodies is in the line of fire when it comes down to accessing whether a true free market economy exists or not. Government interference through regulations like tariffs, taxes, embargoes, price ceilings etc have always been a feature of economies claiming to be free market economies over the years and it seems like they might actually be unavoidable since some control of the formation of the market itself needs to be performed. However, staunch believers in the ideology favor the more libertarian and chaotic version of the idea where the buyers and sellers are left to the forces of the market to determine the course of their actions and hence the market “forms itself”. In my view we are yet to see such a version in practice since human behavior and psychology in many ways is in contradiction with the assumptions this idea makes (we will leave that to a later post maybe). Another major very deep assumption that such an idea makes is the problem of gaging how every individual in the market has an equal “vote” per-se. Since in most economic systems value is pegged to a central resource (traditionally currencies, which in turn are based off of another valuable resource in most cases gold) the fair distribution of such a resource is being assumed if everyone has to inherently have an equal say. Now this a whole different subject within economics, the so called resource allocation systems where again different economies are classified based upon the allocative system that it has consciously or sub-consciously subscribed to. (We will discuss that in the following paragraph). Hence the point being that not always the conditions would guarantee the so called guarantee of lower barriers to entry into the market for both the sides equally. Another major problem as I pointed out earlier is regarding the idea of perfect market knowledge on part of the market players since in essence there is guaranteed to be knowledge distortions as this is related to how the human psychology works. There have even been research into how human perception of things change over time and this exact asymmetrical notion in the information regarding the market is what really forms the basis of the trade itself. This is more formally know as the “Asymmetric Information Theory”. So on a more theoretical front this assumption of perfect knowledge topples the basis of the theory upside down since that asymmetry in the knowledge of the players is what really drives those demand and supply curves.

Now continuing from the discussion above it seems like it is very important to have an idea of actually how the market segments into the so called “consumer” and the “supplier” side. As always the answer here is not very clear and there are multiple theories that have been put forward in attempts to explain the so called distribution of the resources in an economic setting. One such idea which in the modern world has seemed to go hand-in-hand with the idea of a free market is that of capitalism. Essentially capitalism in simple terms is the private accumulation of these economic resources, namely the means of production and their organization for the pure extraction of profit and hence addition of value to the overall economic system. Hence this means that such an economic system is characterized by private property rights, capital accumulation, a competitive market and wage labor. The accumulation of these resources are purely in essence through the competitive market which again in theory has to have no barriers to entry for new comers. There are a number of different types of capitalist systems that have been implemented around the world, and it seems to be the center stage for the debate on how in general our wider society should be organized both politically and economically. In contrast welfare and socialist states along with communism provide the alternatives. The grey scale here ranges from a total control of the resources in the hand of a certain few to a fully distributed control and on another level it is a balance of total control with the government versus the general public (assuming there is a marked distinction in those two population sets). The question as to which system is the best at efficiently allocating the overall resources in the society is what drives the scoring card for these segmentations of the economic systems.

I personally believe that capitalism is a double-edged sword whose control resides eventually with the people as a whole. Capitalism can be seen as both being beneficial and being very detrimental for human progress based on history and current events around the world. Why I think capitalism is detrimental in some cases is that it lays the ground work for social injustice and inequality by breeding in greed and dishonesty on part of people who have an ever increasing control the economic resources (and eventually the social resources as the line gets more blurry with time). In a way though if you think purely in terms of the whole economic system, actions based on greed are generally not adding any value but in most cases actually taking it away, which is in a way paradoxically very anti-capitalist. But at the same time the accumulation of such resources in hands of certain individual or group of individuals can also drive overall growth in the society if the ideas and aspirations of such individuals or groups are representative of the overall consensus of what progress should be like. In general I think subscribing and clinging on to extreme polarizing philosophies is very dangerous since our societal systems are highly intertwined and messy as opposed to what the theory sees.